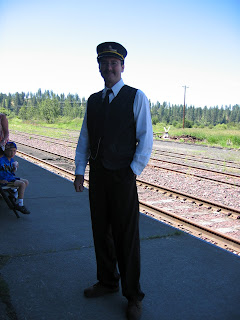 Some of us have long known Roger Farrell as that great looking guy who keeps the speeder riders in line each year.  This weekend, however, Roger donned his work clothes to do some wrap-up work on the new platform.  Tightening down the planks further, he then gave the whole area a good washing so the rest of the deck could be stained.  It was a long day for Roger, and we appreciate his steady dedication to the HPG.  By the way, probably not everyone knows that Roger now has a speeder of his own, so we will look forward to some updates on that front!

With more warm weather in store, Bob Behal and his crew will likely be back working on the caboose next week. Thanks to one and all for the many hours of volunteer work that make things happen at the depot.  By the way, did anyone notice the set of trucks is gone from our house track?  Seems our HPG treasurer Don Somers helped get them sold, making some extra money for the group.  Thanks Don!

Posted by WIMHPG at 9:21 PM No comments:

Back to Work on the Caboose! 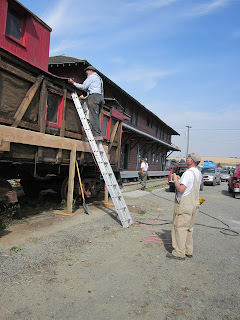 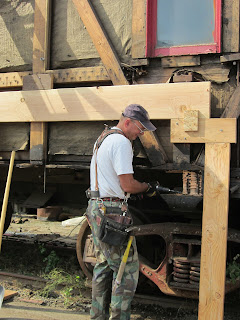 Once again, Bob Behal has stolen into town with no fanfare to go to work on an HPG project (that's Bob, pictured above).  This time it's the caboose, and Bob is all about getting as far as he can with stabilization and restoration before winter sets in.  On Saturday, Bob was joined by Bill Warner, Don Somers and Kenny Cada, who pried boards loose, dug out nails and pulled off roof sections.  What they found beneath the red paint was plenty of rot, and according to Don Somers, the cupola has been a major contributor by directing water down into the roof and side walls.  Bob painstakingly cut out a beam to replace a major support beam on the side, but much of the work seems to be analysis and strategy.  Once Kenny Cada was done getting her hands dirty, she took a turn welcoming Michael"Bug" Deakin to the depot.  "Bug"is from Petaluma, California, and is part of a non-profit called Heritage Salvage. He chanced to find the depot, bought some items from the Company Store, and hailed the HPG for its part in salvaging not only a building, but a heritage of short line railroading. 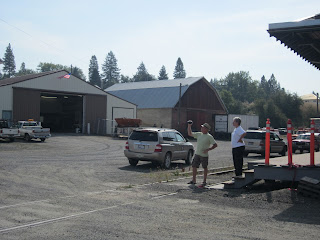 Posted by WIMHPG at 8:53 AM No comments: