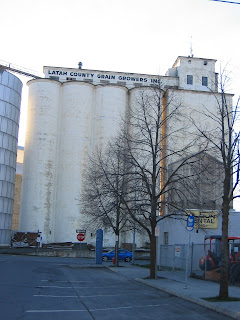 Thought it would be interesting to see what's going on in Moscow, as reported in the Daily News..... Backers of the Silo Square are tackling a big restoration effort. According to Keith Petersen, ITD attended this meeting and used the depot as an example of how they can assist with restoration efforts. Will the silos become a competitor for funding?

Anderson outlines vision for Moscow elevators
First phase of 'Silo Square' project at corner of Sixth and Jackson streets will include community market
By Tara Roberts, Daily News staff writer
Wednesday, January 16, 2008 - Page Updated at 12:00:00 AM
John Anderson jokes that he "bought the most expensive pigeon coop in town" when he formed the Anderson Group LLC and purchased the old grain elevators on the corner of Sixth and Jackson streets in Moscow.
The Anderson Group formed last spring to save the structures, which were going to be demolished by B&G Ventures. The group officially purchased the site for $750,000 in July.
The Anderson Group is now moving forward with plans to turn the decades-old structures into a business and cultural center in the heart of Moscow. Anderson presented the project's vision, goals and potential plans for a group of Moscow and Latah County leaders and state representatives Tuesday in conjunction with the Clearwater Economic Development Association.
CEDA Executive Director Christine Frei said CEDA staff were impressed with the Anderson Group's project, officially known as "Silo Square."
She said she called the meeting to bring together agencies that could potentially partner with the Anderson Group or help it find funds.
Anderson said he and his partners hope to make Silo Square "one of the most significant projects that Moscow and this region are going to see." He presented several examples of silo and grain elevator redevelopment in cities such as Sacramento, Calif., and Akron, Ohio.
The Anderson Group is in the process of cleaning up and securing the Silo Square site, Anderson said. The demolition of a few wooden structures attached to the elevators has left an exposed pit and debris.
The Idaho Department of Environmental Quality just accepted the Silo Square project for its Idaho Community Reinvestment Pilot Initiative. The project is now eligible for a rebate of up to 70 percent of environmental clean-up costs, capped at $150,000.
DEQ Brownfields Specialist Steve Gill said a crew will be in Moscow to start a brownfield assessment by early March. Brownfield assessments determine how contaminated a site is, identify clean-up options and estimate clean-up costs. Clean up will begin as early as this summer.
The brownfield assessment also triggers federal grant and loan opportunities, Gill said.
"From a state standpoint, we are very enthused about this," Gill said.
As the site is being cleaned up, the Anderson Group is gathering ideas for what to put in Silo Square. Depending on how the project is structured, the grain silos and elevators at the site could provide up to 100,000 square feet of space, Anderson said.
He said the first phase of the project will be a ground-level community market space anchored by Otto's Produce. Steve Otto is one of the initial members of the Anderson Group. The market space would help stabilize and pay for the project as it continued to grow.
Anderson Group member Clayton Anderson, John's father, said it will cost about $1 million to $2 million to get construction in place for the market.
What else will be in Silo Square still is open for discussion. Whatever is built, the Anderson Group hopes to achieve the U.S. Green Building Council's highest certification standard, Leadership in Energy and Environmental Design (LEED) platinum.
"This is a place that should lend itself to innovation," Anderson said.
He said the middle levels of Silo Square could be used for professional and commercial space. The upper levels of the site's smaller silos would complement residential and live/work areas. Several people interested in living in Silo Square already have approached the Anderson Group.
The upper "penthouse" above the main elevator could become a restaurant or conference space, Anderson said. The top of the largest silo, which is 70 feet in diameter, could potentially be a performance or laboratory space.
Anderson showed the Silo Square site to Marcos Novak, the mind behind the super high-tech Allosphere biomedical research station at the University of California at Santa Barbara. He said Novak is looking for a location for a second Allosphere, and Moscow is now on his list of possibilities.
Locally, Alturas Analytics President Robin Woods has proposed basing a Center for Ecological Health in Silo Square.
Anderson said the group also is looking into wind turbines for the top parts of the structures that could turn them into "a giant battery for the city."
The Anderson Group wants whatever goes into Silo Square to benefit the community as a whole, Anderson said.
"I can't emphasize this enough - the Anderson Group came in to save this structure, but in no way do we feel we own this structure," he said.
Moscow Mayor Nancy Chaney asked John Anderson if there are any networks for the Anderson Group to find investors. He said the historical and sustainable design aspects of the project could open funding opportunities. However, the Anderson Group will not look into such options until it has established a business plan over the next several months.
Some of the state representatives said their departments couldn't do much to help the Anderson Group because their funds must go to public projects.
Others offered some avenues to help. Margaret Hair of Idaho's USDA Rural Development Office said her department could potentially help with a feasibility study, business plan or ownership model analysis for the Anderson Group. The work would have to be sponsored by a public or nonprofit entity such as the city of Moscow or CEDA. Anderson said the group also is likely to work with the UI College of Business.
Paul Kimmell, Avista's regional business manager for the Palouse, said his company could assist with green building concepts and energy-saving measures. Moscow Urban Renewal Agency liaison Gary Riedner said the Anderson Group could work with the Legacy Crossing Urban Renewal District for public infrastructure.
Tara Roberts can be reached at (208) 882-5561, ext. 234, or by e-mail at troberts@dnews.com.
Posted by WIMHPG at 8:32 PM No comments: 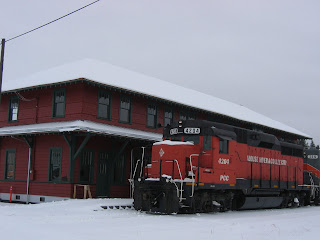 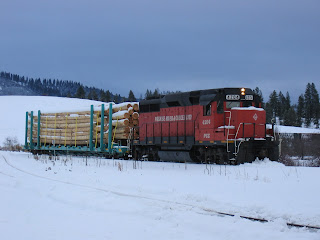 Several more inches of snow greeted us today and Stan Patterson called to say the train would be headed to Harvard, so Don Somers and Barb Coyner did a bit of train chasing. First stop: the depot for some photo opps and car switching. Track maintenance specialist Scott Cahill cleared track and Jeremy Leiterman was at the throttle as cars were moved around.

Stan says the car storage at Potlatch and other sites has proven very profitable for the W&I Railway. He even suggested that we might store cars on our tracks, which would contribute $2/car/day. The W&I makes a handsome sum storing cars and that's helped create profit for the line.

Shortly after noon, the two locomotives headed to Bennett's at Princeton, then one engine continued on to Harvard for the first pickup of poles being shipped by new customer Stella-Jones Timber, which took over the Baxter Pole peeler mill at Juliaetta. The poles were 45 and 60 feet long, and bound for Canada. Stan is clearly pleased to have two strong customers on the route now and at some point, Stella-Jones plans a big shipment of perhaps 20 cars. S-J forester Colin Port anticipates sending regular loads out to reduce the backlog of poles at the millsite. That's great news for the W&I and depot backers!
Posted by WIMHPG at 7:19 PM No comments: 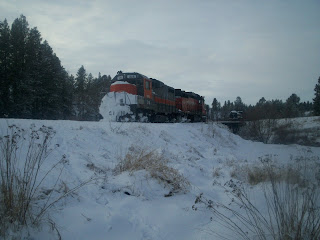 The depot is surrounded by lots of snow these days, and when Stan Patterson called today with an update on the W&I's scheduled pickup at Harvard tomorrow, he said they'd been blasting through six-foot drifts at 30 MPH today. "It was like riding in a washing machine," he said, noting that he could see nothing but snow out of the cab as he traveled along toward Palouse. We talked Bear Nisse into braving the deep snow to get the accompanying shot (thanks, Bear!) at Palouse. Bear and LuJane Nisse publish the Latah Eagle. They've certainly been part of the team as we've worked on the Depot Restoration and we can never thank them enough for their support!
Posted by WIMHPG at 5:51 PM No comments: