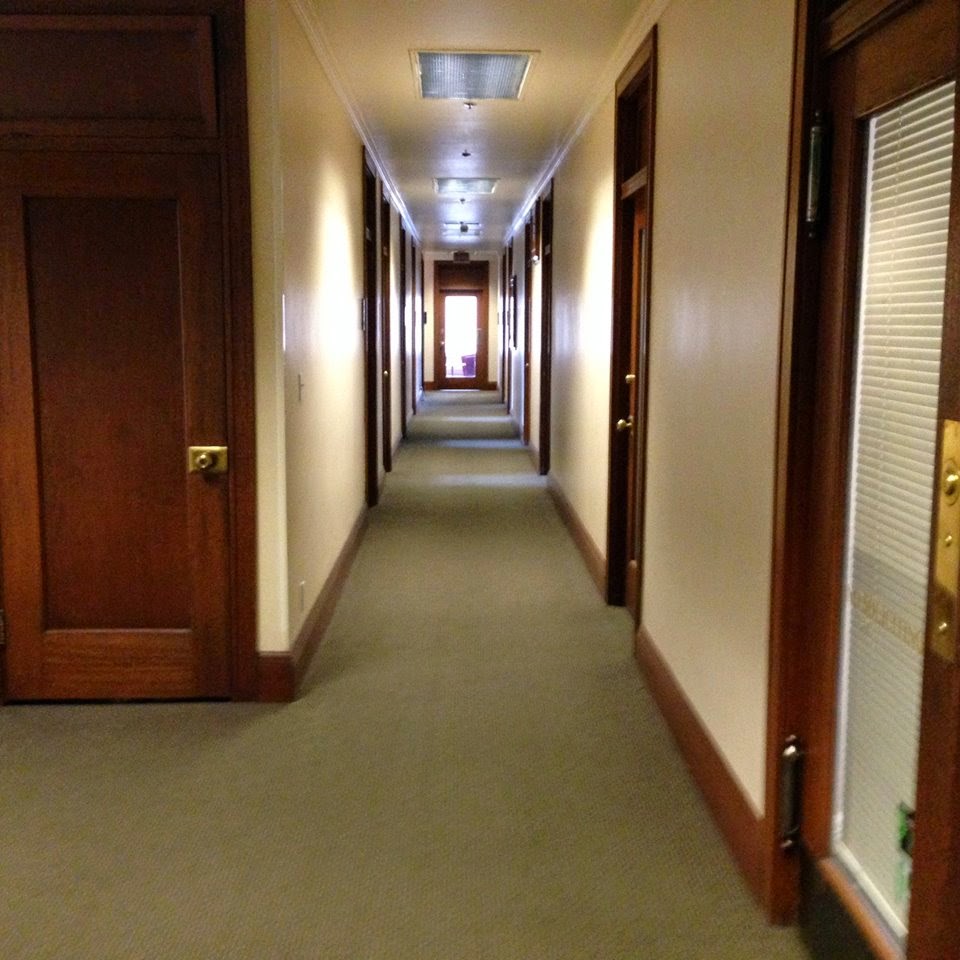 It was exciting to be at the depot yesterday to see Jim West coming driving up in a U-Haul after a marathon trip to Portland. Hal Van De Vord, Karen Rohn, and Mike and Barb West assisted Jim in unloading some absolutely beautiful doors, complete with transoms, hardware, mail slots, etc.  These are going to be totally awesome for our upstairs!

Finding replacement transom doors for the second floor has been #1 on my bucket list since the HPG bought the depot July 2001. One marathon 40-hour trip from Coeur d'Alene to Portland to Potlatch, and home to Cd'A, Amtrak and U-Haul combined to support a very successful safari.  I bagged twenty-five 106-year old doors now safely tucked into the freight room by HPG volunteers on Friday. They also unloaded 100's of feet of matching door trim and baseboard, all from the Railway Exchange (Oregon Pioneer) Building, built in 1909. Our thanks to all of our generous donors who gave to "Idaho Gives", danced to Jon &Rand and Blue Highway, or rode a speeder in 2014. Thanks to you we could afford to buy these doors and trim!  Now, if Frontier will remove their pole on the NW corner, we can start stocking the second floor and get to work on finishing some offices! Can I get a yaaah-hooo?

The doors are pictured above as they once looked at the Railway Exchange in Portland.
Posted by WIMHPG at 7:47 PM No comments: 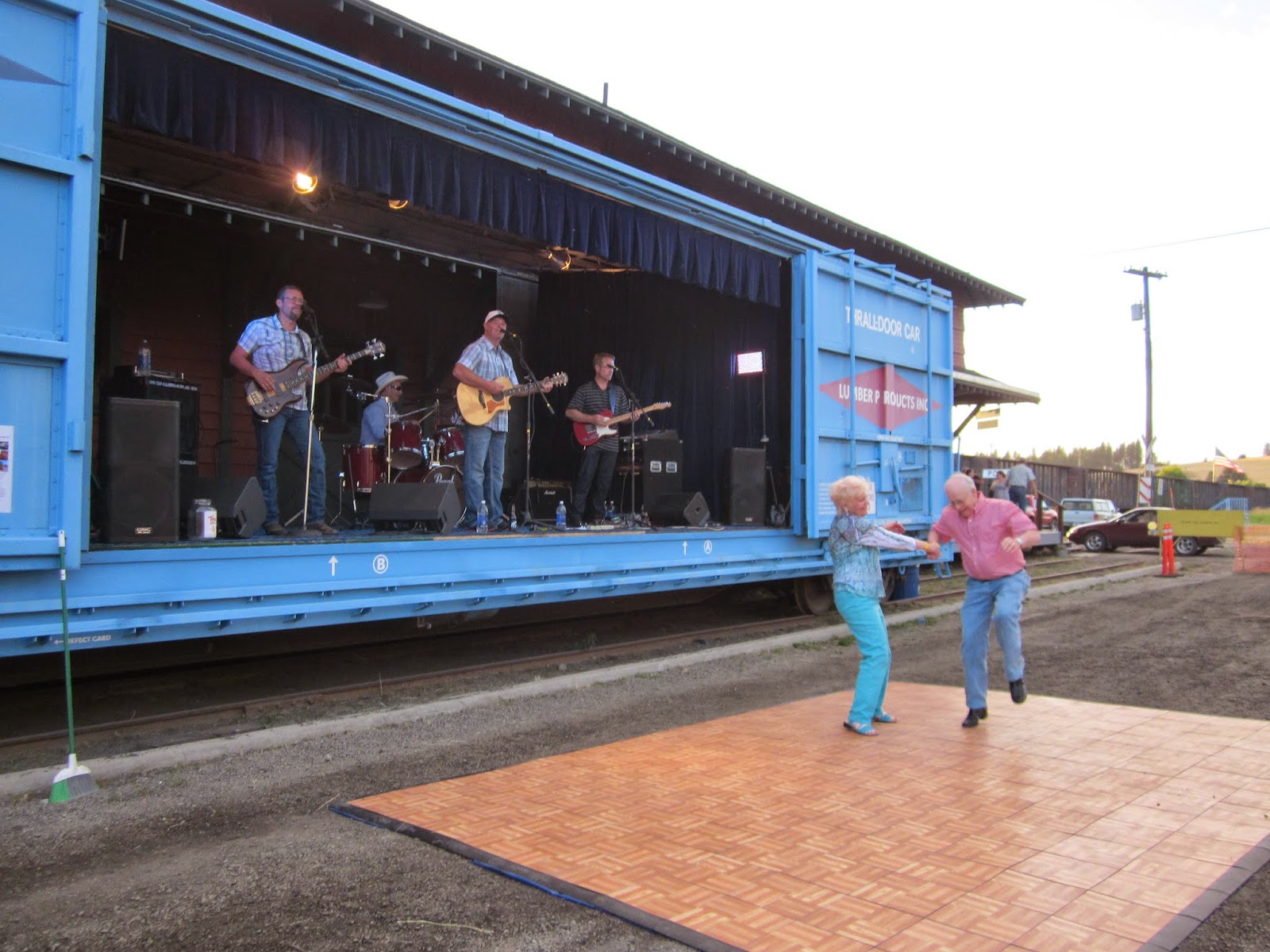 Leave it to seasoned dancers Leonard and Marlene Zahnow to kick off the dancing to Blue Highway on Potlatch Days. Zahnows owned the famous Riverside dance hall and park from 1957 to 1962, booking such greats as Johnny Cash, Little Jimmy Dickens and Tex Ritter.  The couple bought Riverside because they liked to dance, and now in their 80's, they proved they still do! Zahnows traveled from Bellingham to link up with old friends during community day celebrations. 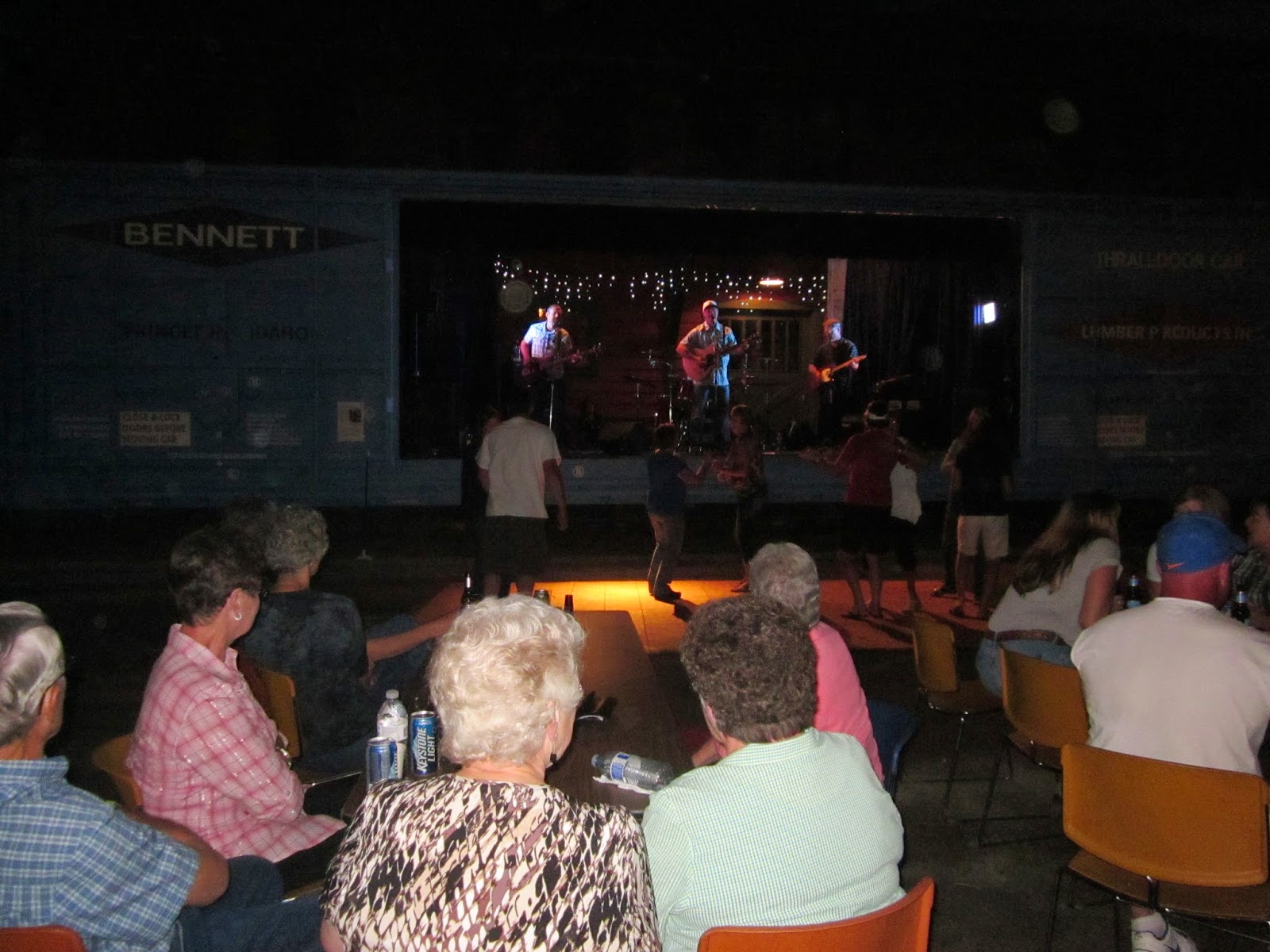 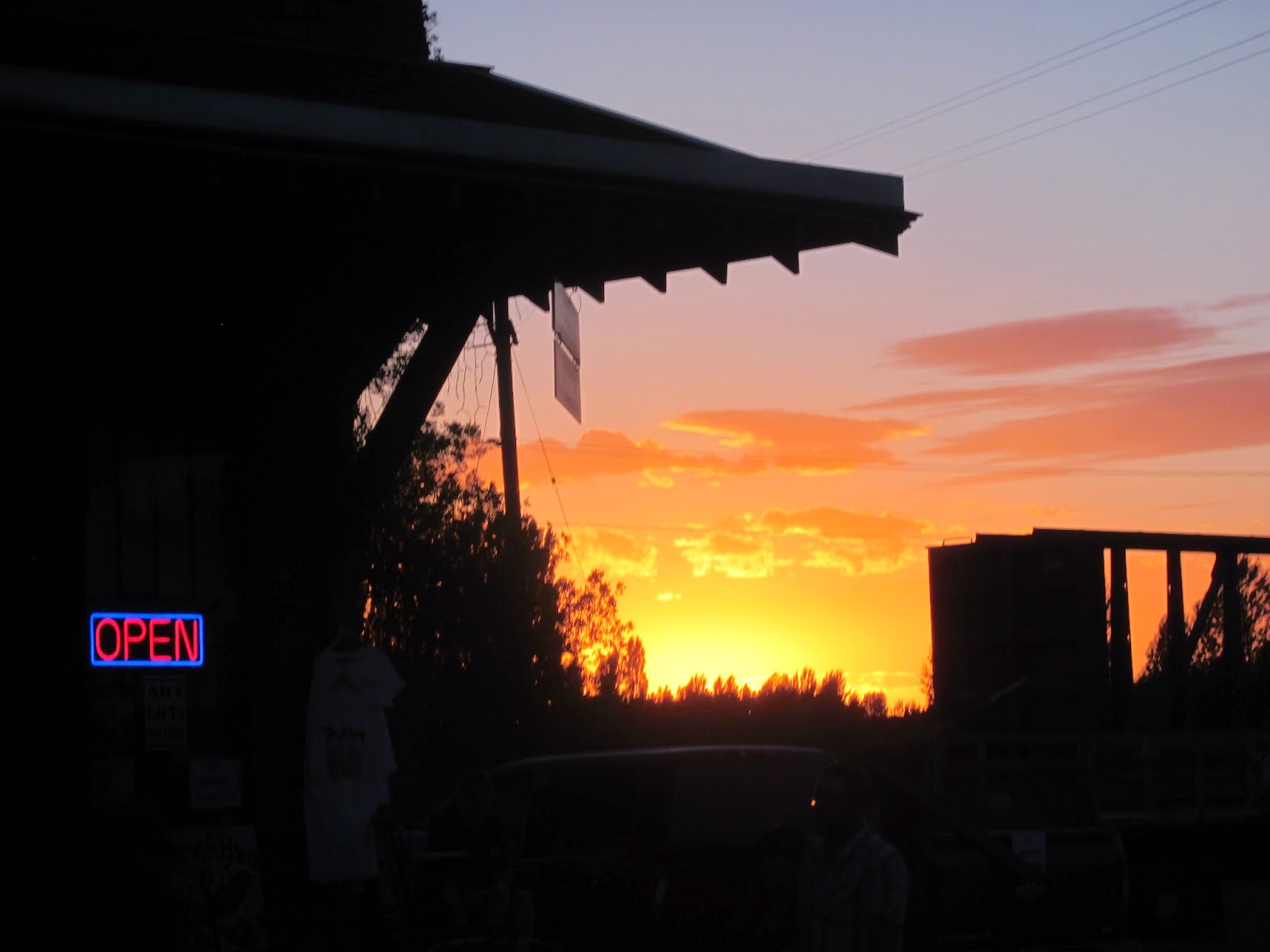 Sunset at the Depot was spectacular as the evening brought out lots of dancers and Blue Highway fans!
Posted by WIMHPG at 7:11 AM No comments:

With no warning, swarms of people with cameras filled the depot this morning.  Who knew the Railroad Station Historical Society was out to pay us a visit--unannounced?  They were a great group and I was happy to show them around, telling our story of restoration efforts.  Among the visitors was Fred High, from Covington, Washington.  Fred is friends with Ken and Sally Vogel, and some years back actually came over to help with the speeder event.  It was fun to catch up with him.  Also visiting was Russ Holter, from the Department of Archaeology and Historic Preservation at Olympia.  He was a wealth of information on tax credits, so I hope we can chat further about some of that.  After the impromptu tour, Robin McKinney stepped in to ring up several purchases from the group, giving the HPG over $300 in book sales.

I am hoping we can get some photos from the group later so they can be posted.  And I hope they will be back again one day soon!
Posted by WIMHPG at 9:58 PM No comments: 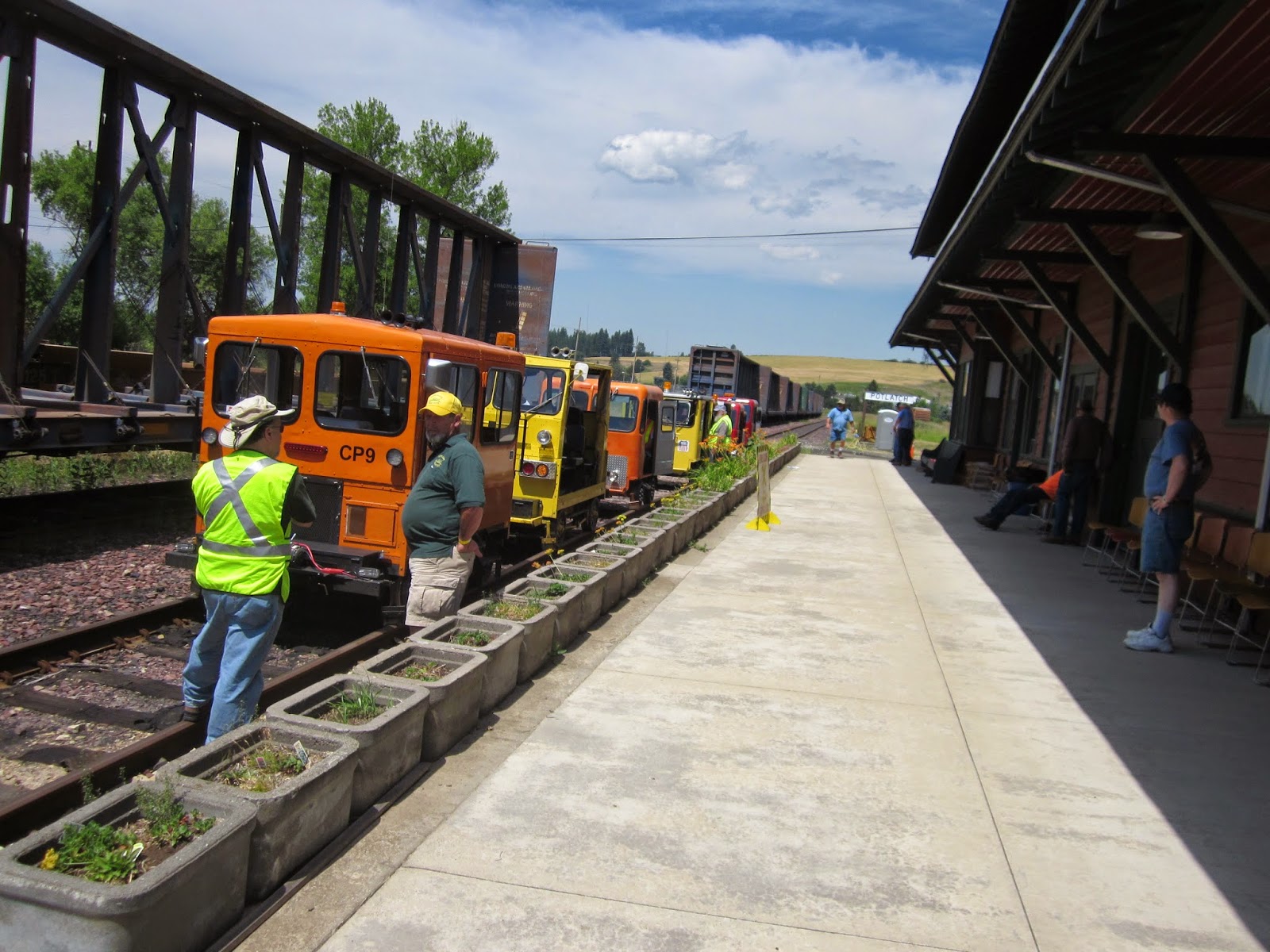 There was a different feel to the annual speeder event today, a much less hectic pace.  With less speeders coming to share rides, however, don't think there was less enthusiasm!  People seemed to enjoy sitting on the dock, visiting while waiting for their turn.  And they definitely liked the longer rides. 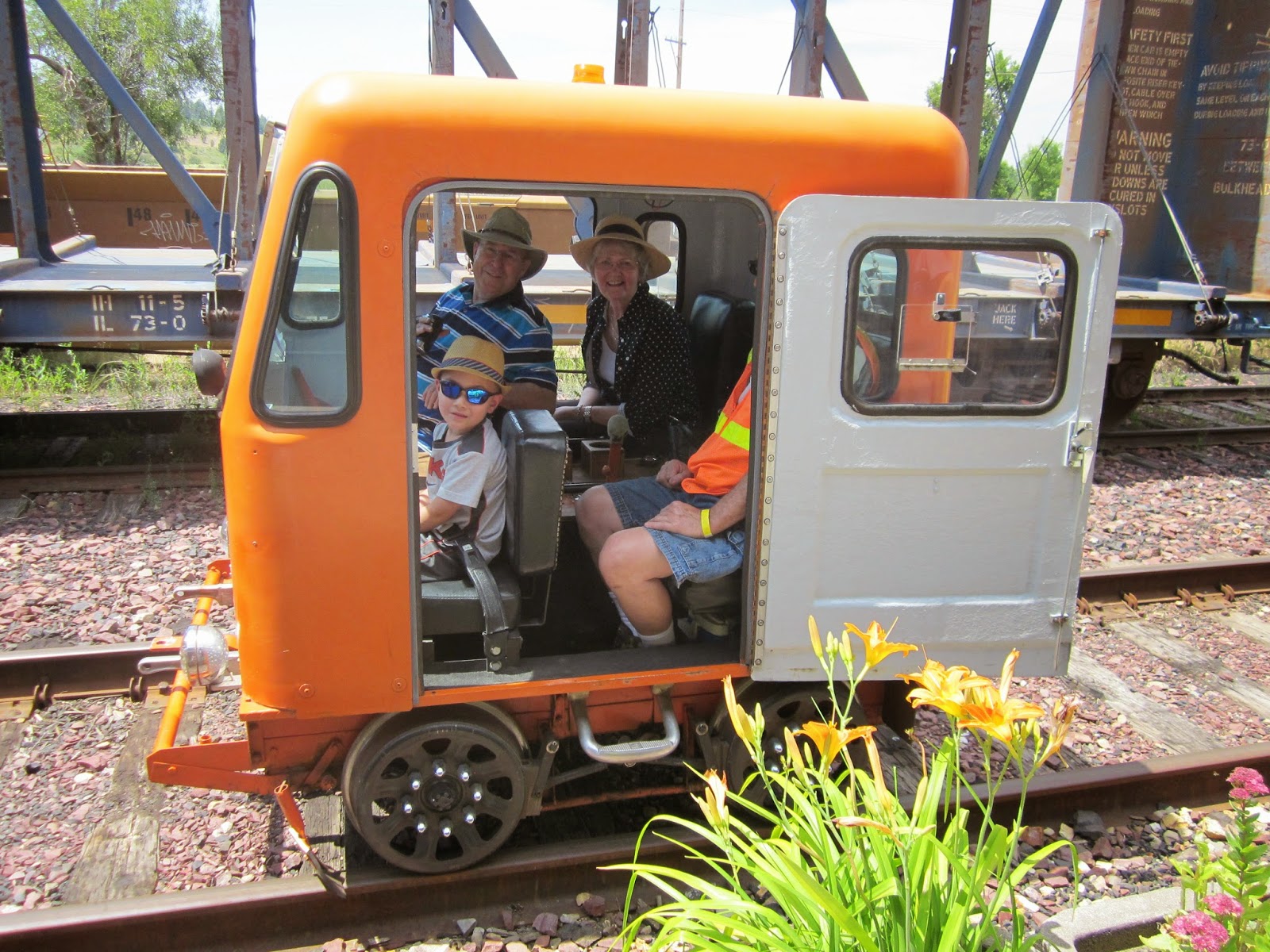 Irv and Janice Johnson (above) eagerly bought tickets when they first went  on sale, knowing this would be their chance to take grandson James on the ride to Princeton. Janice (Vowels) grew up in Princeton, and saw the trains run right past her house each day.  James and his parents were visiting from Sacramento and the whole gang rode the rails. 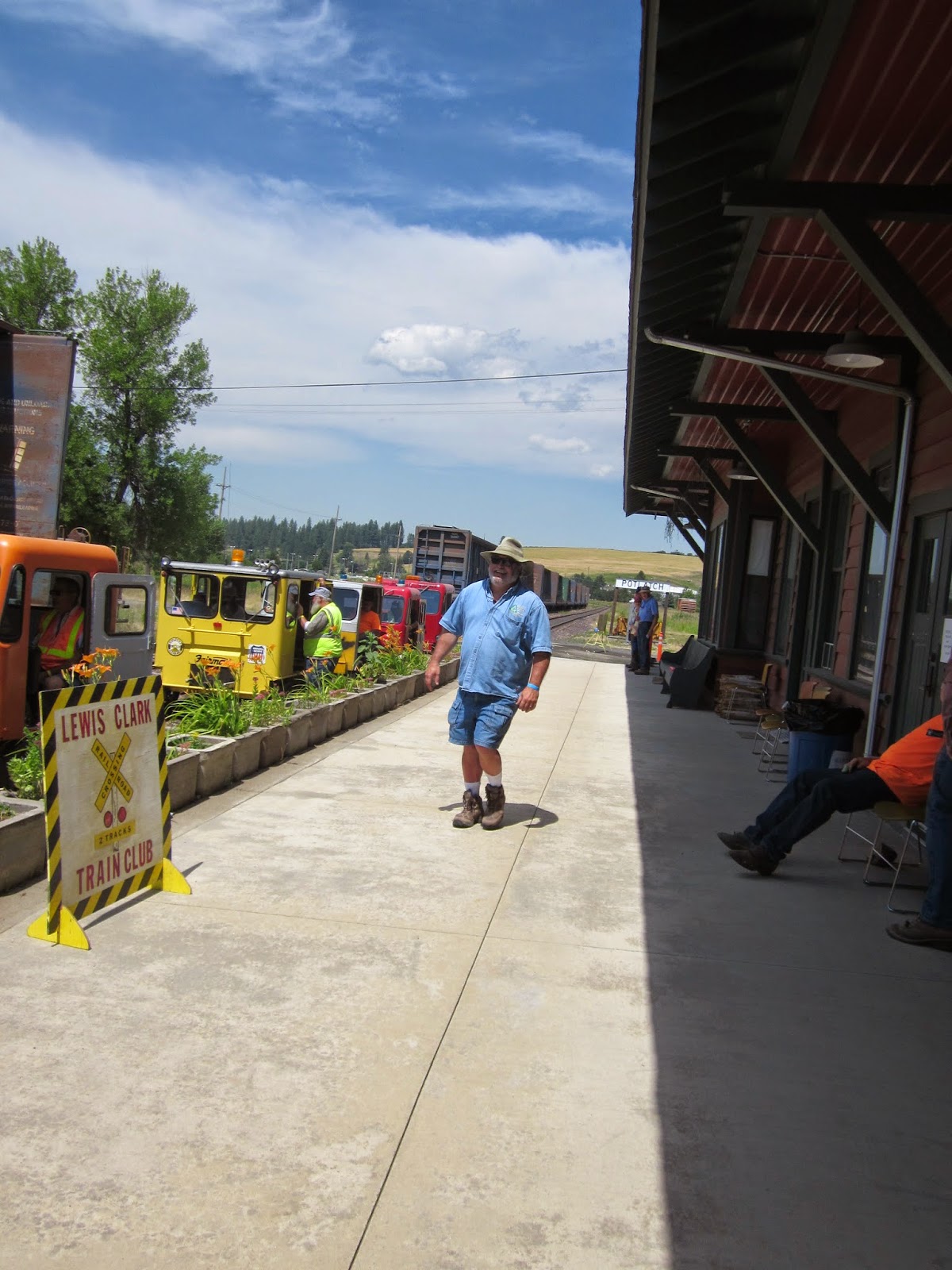 Fearless leader Jim West was on the move all day, starting probably at 4 am when he opened all the windows in the depot to cool things off. He had his comfy motorhome parked near the caboose, but never accuse this guy of slacking or sneaking off for a nap. He worked non-stop all day! 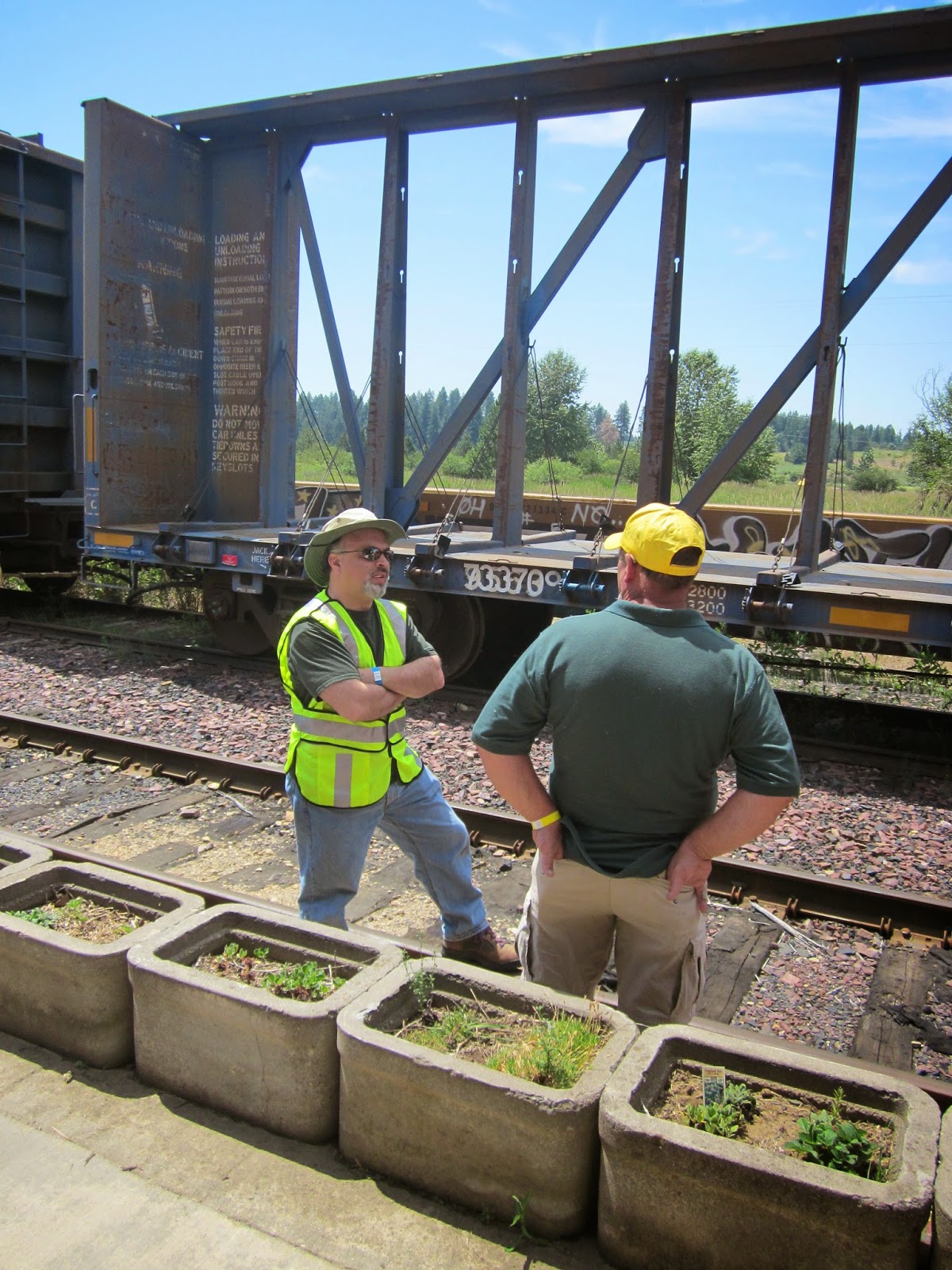 David Zuhn is another trooper, serving on the HPG board and coming all the way from St. Paul, Minnesota to help with speeders.  Thanks Dave, we love seeing you out this way! 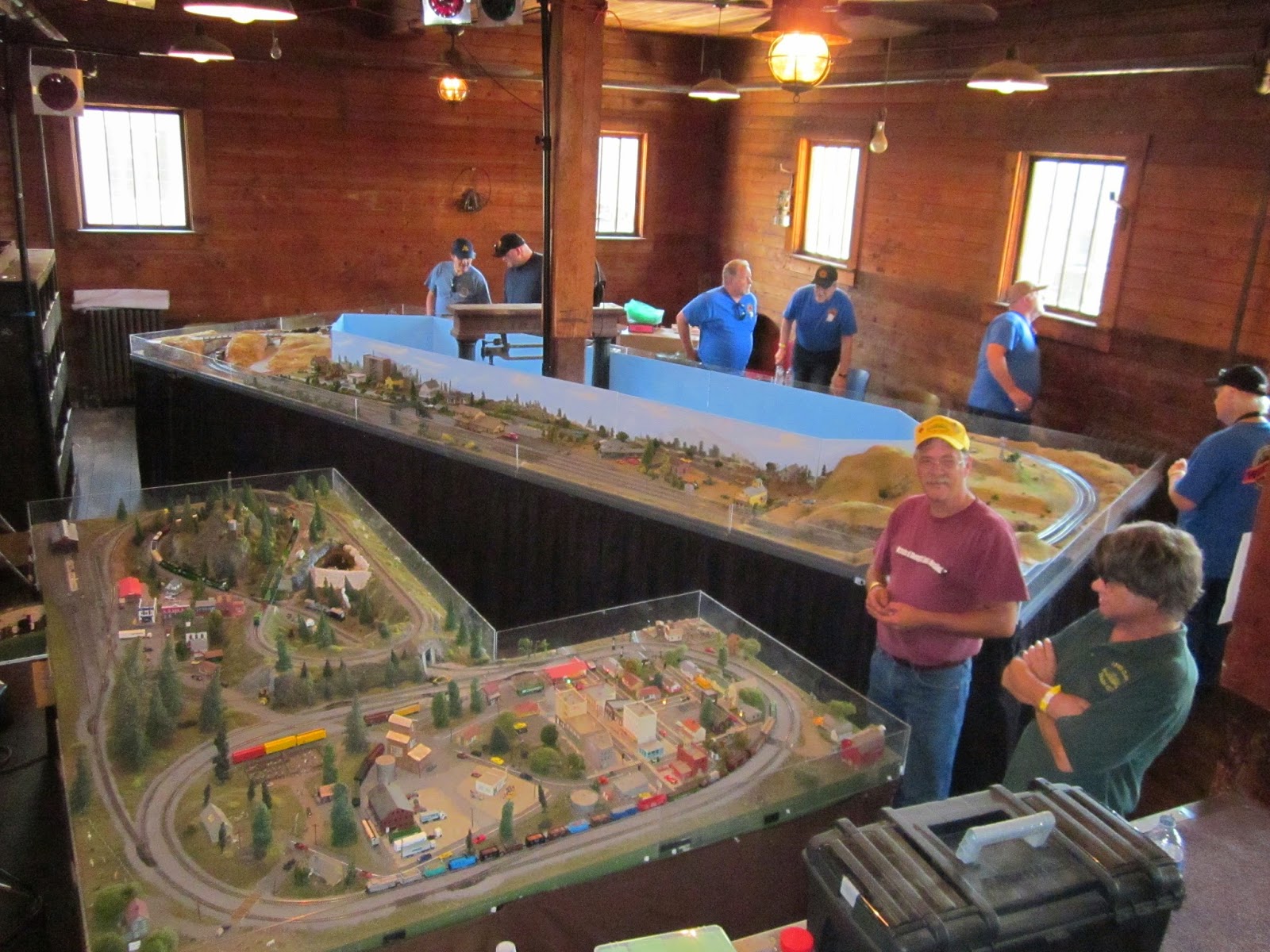 And let's give a lot of applause to the model railroaders who delighted everyone with their layouts. The N gauge set-up came from Lewiston and the HO layout traveled from Spokane.  There were some tense moments when the guys from Spokane saw the freight scale standing right smack in the middle of things, but amazingly enough the layout wrapped perfectly around the scale.  Whew! 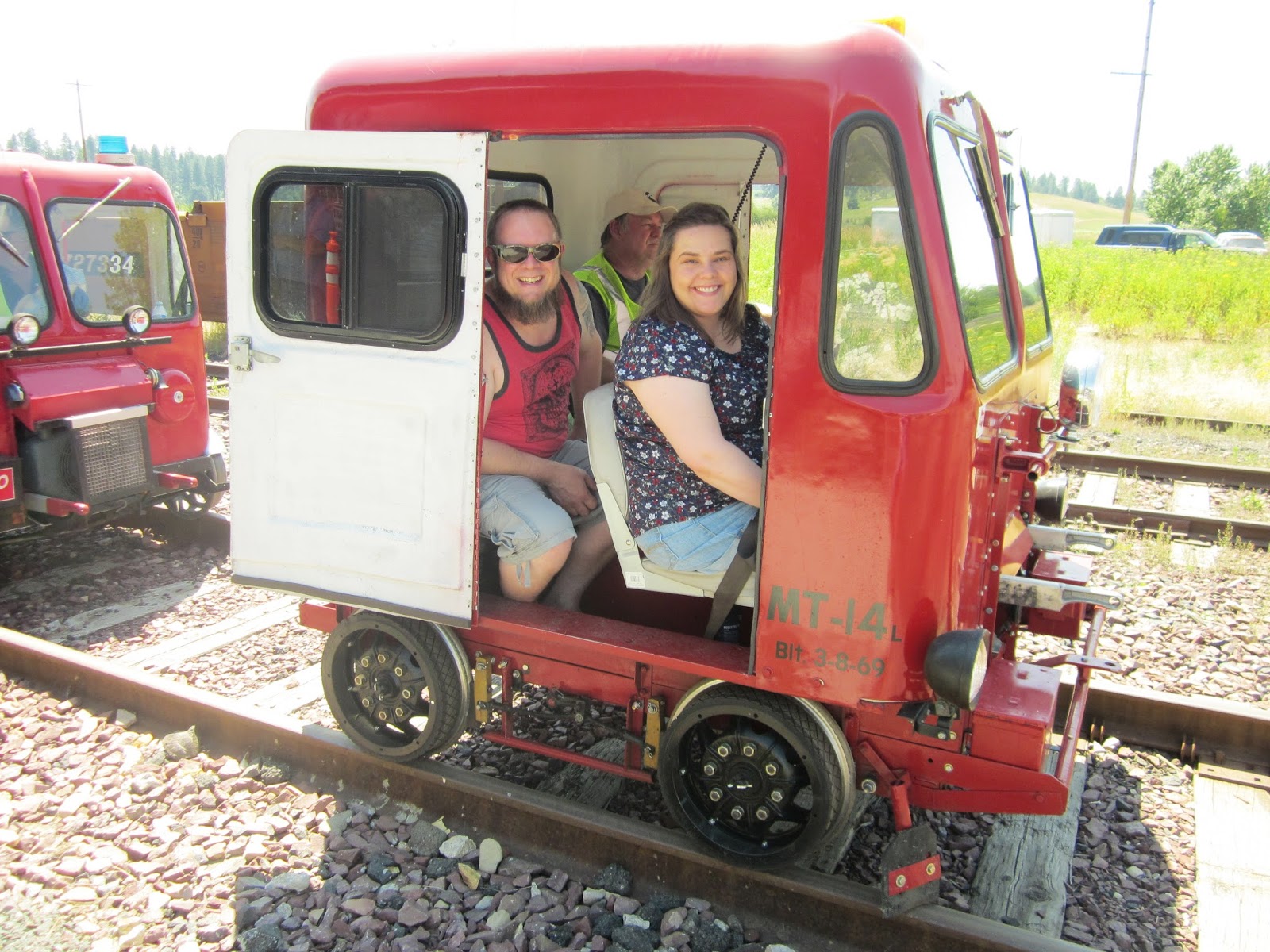 Kenney and Jenny Gonzales came out to grab a speeder ride after seeing the announcement on Facebook.  Kenney grew up in Princeton and saw the trains come through, but he and Jenny chose the Kennedy Ford route to see some new country.  Jenny's grandpa, Bill Biggam, had been an active member of the Latah Railway model railroaders at the Latah County fairgrounds in Moscow before his death.
Posted by WIMHPG at 10:04 PM No comments: 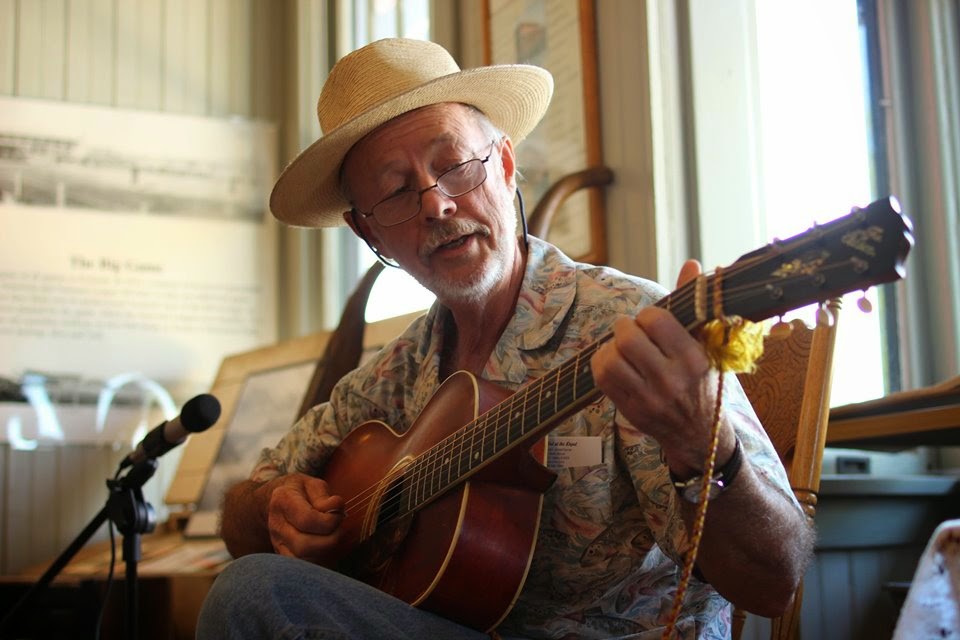 Thank you Gary Eller for strumming and singing at the Depot yesterday.  Karen Rohn, the WIMHPG VP, has carried Gary's book in her store, and said yes to him stopping by to play a  few tunes. It was a sweet little event, one everyone enjoyed. Thanks Ryon Ownbey for capturing this nice photo.  And look for Gary to return in the future to do a full-fledged concert!

Meanwhile, speeders are coming SOON with extended rides this year.  July 12 is the date!  Call the Depot at 208-875-1357 for further details on pre-sale tickets, new routes and other events happening that day.
Posted by WIMHPG at 7:07 AM No comments: