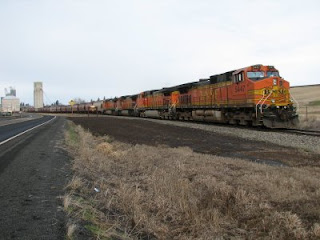 Last Tuesday (December 9, 2008) we got a chance to see what Stan Patterson, the W&I, BNSF and the state have been working on for over 2 years. The W&I had been negotiating with BN since Sept 2007 to pull a longer train to Oakesdale (the usual grain trains have been 26 cars for the past couple of years).

Stan was determined to get some publicity for the momentous event, so some TV stations and newspapers lined the track along with several of the locals. It was a party mood as Jeremy Leiterman led the string of four BN locomotives, dropping off 43 cars at Spangle, 11 at Plaza and 56 at Oakesdale. Jeremy admitted that he enjoyed having that much power under his control, but the 6500-foot train wasn't the longest he'd ever pulled. 7500 feet was his record.

As the day wore on, Co-Ag employees raced the clock, with a tight deadline to meet. The 110-car train was to be back at Marshall on a 24-hour turnaround, with the cars of soft white wheat headed utlimately to Portland and onto the export market.

By the following day, Co-Ag general manager Jackie Tee reported that the trial run had come off without a hitch. The co-load experiment had been a success and there is hope for more long grain trains in the future. Hats off to Stan and Jeremy for their perseverance!
Posted by WIMHPG at 4:55 PM No comments: