Another Depot Gets Some New Art 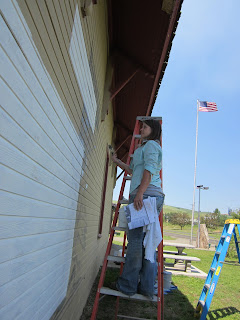 Today WIM HPG board member Karen Rohn kicked off her efforts to paint a new mural on the side of the old Princeton depot, now located in the Scenic Six Park.  Karen has designed a nice layout describing the establishment of the mill.  She hopes to have the large mural done in about two weeks.

A little background on the depot in the park:  The Princeton depot was moved to the park by Doug Wasankari in August 1990.  It has since been used as a community gathering place.  The depot on wheels is pictured below as it arrives in Potlatch.

Once the little depot and the steam engine Old Number One were set in place, the City of Potlatch held a dedication ceremony on October 12 1990, featuring Governor Cecil Andrus and Weyerhaeuser descendant Betsy Coombs. 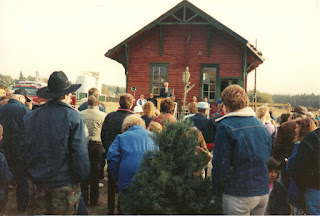 Pictured below, Governor Andrus visits with Betsy Coombs as park backer Carol Reynolds looks on (Clayton and Carol Reynolds were key figures in developing the park).  Keith Petersen and Mary Reed, also in attendance, are pictured in the background. 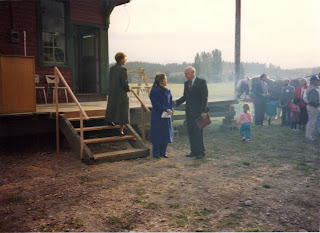 Posted by WIMHPG at 4:19 PM No comments: