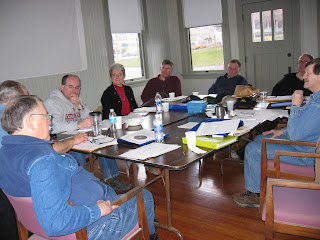 Saturday March 19, 2011, brought the WIM HPG board together for its annual meeting and the group saw some changes.  For starters, charter board members Tom Burg and Jack Coyner got off the board, along with Brian Magelky, and two new members, Webb French and Paul Kimmell, were added.  During the election of officers, Kendria "Kenny" Cada took over the helm as President, Jack stepped in as Veep, Barb Coyner stayed on as Secretary, and Don Somers retained the challenging duties as Treasurer.  Jim West will serve as Chairman of the Board.  Other board members are Tom Hillebrant and Carl Sonner.

The group reviewed its significant progress at developing the north end of the depot, and discussed upcoming demolition efforts as volunteers from US Bank work on the second floor on April 30.  Board member also want to make the depot more open to the public and many hope to see the Potlatch Historical Society keep some regular hours during the summer.  Don and Jack might hold some train group meetings in the future in keeping with the Palouse Empire Rail Society's past mission.  And the X5 caboose also received its share of attention as it was announced that Poke and Jeanette Montgomery will donate lumber to repair the caboose's deteriorating siding.  The Potlatch Recreation District has chipped in with a generous donation to help restore the caboose, as well.  It is this type of local support that has the HPG moving ahead. 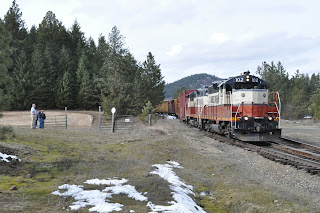 In addition to the meeting, several HPG members went "sidetracking" to check out the trains around Plummer Junction.  The above photo is compliments of Tom Hillebrant, the able editor of the White Pine Quarterly.  Look for more of his photos in the next WPQ.﻿
Posted by WIMHPG at 9:04 PM No comments: