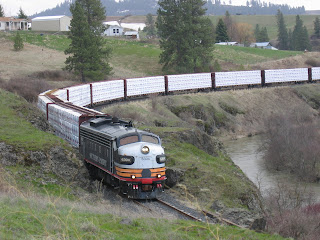 Stan Patterson called today to say that the F-unit was pulling 15 cars -- that's right, 15 -- out of Bennett Lumber about 1 pm. How long since we've seen a train that long come past the depot? And behind that beautiful Southern Pacific locomotive, no less. Of course we gave chase and wound up in Palouse, watching the train wind along the river and into town. It's interesting to hear how many people are watching the trains along the route. They love that "new" locomotive, part of a nostalgic era for sure.
Posted by WIMHPG at 4:03 PM 1 comment: 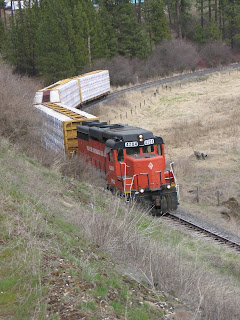 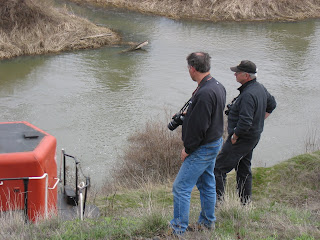 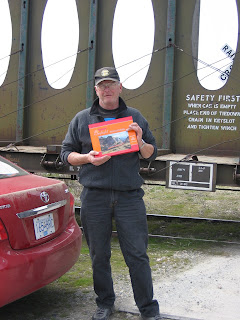 (Pictured Above: W&I train picking up Bennett cars along Palouse River; Ken Storey, left, and Nils Huxtable perch above the river to get a good shot of the train; Nils Huxtable with his book on the Daylight)

Brian Magelky, President of the Latah County Historical Society, toured the depot today and came away thinking Potlatch might just be the place to launch the Society's new exhibit on railroads next year. He was especially taken by the freight room, which he thought would make an ideal setting for old railroad history. As an HPG member, Brian also thought the speeders would be a great enhancement for the depot exhibit.

Just as Brian left, opportunity knocked again as Stan Patterson and Jeremy Leiterman came through to pick up four cars loaded with Bennett lumber. They stopped to shift more storage cars before hauling the Bennett load, and that's when a red car showed up with British Columbia license plates. Ready with their cameras, rail buffs Nils Huxtable and Ken Storey recounted that they'd come from Vancouver BC to track a special Union Pacific passenger train heading from Spokane to Hooper and on to Portland. The train was carrying several dignitaries, among them the VP of the UP.

Turns out that Nils publishes train books under the trade name Steamscenes, based in West Vancouver, while Ken works for the Vancouver Sun. Talk about train nuts, these guys could recite details of trains from all over the world, because they've been all over the world, checking out steam engines, famous train routes and the like. They were both especially pleased with the Washington and Idaho Railway's new F unit, which is still wearing its Southern Pacific colors (the Southern Pacific is Nil's favorite). The depot restoration also got rave reviews from these two experts. When Nils just happened to have his book on the Daylight in the car, well, he made a quick sale on that one. A beautiful book!

As Stan and Jeremy made their way along the Palouse River to pick up the waiting Bennett cars, Nils and Ken showed their sidetracking expertise, scrambling down a steep bank to photograph the train as it headed back toward town. How ironic that once this very same section of track provided a backdrop for trains hauling dozens of log cars out of timber country. Today's locomotive pulled only four cars and of course there was no caboose.

As the sun continued to shine all day, it seemed a perfect day to track trains. Just too bad that we didn't have a heads-up on the UP special headed to Portland. From Ken's report and photo, it must've been a good show!
Posted by WIMHPG at 7:10 PM 2 comments: 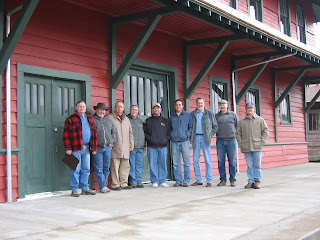 The Washington, Idaho and Montana Railway History Preservation Group Board of Directors met at Potlatch City Hall on March 15, 2008, after a tour of the depot. With most of the exterior work completed on the building, HPG members turned their attention to how to move ahead with developing the interiors. There was talk of applying for more grants, working with the Potlatch Historical Society and moving cautiously toward getting the community into the building for events.