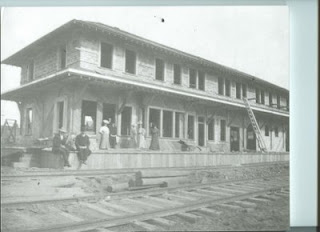 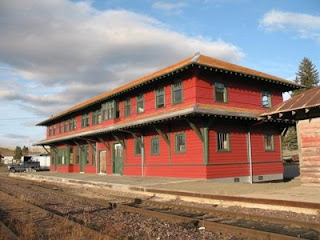 Don Somers and Jack Coyner have been slaving away, weed whacking and getting the depot ready for the Speeder Event on July 12. Yesterday the guys took a break to show some Seattle train buffs around. The men were aware of the depot restoration thanks to Ken Vogel's bragging. Additionally, Stan Patterson called to say some Midwest speeders had been interested in the WIM and the depot, although the group's trip from Pullman to Marshall was so long, it was questionable the speeders would get down to Potlatch this time. The depot is looking good and flowers have been planted in the planters around the loading dock. Thanks to Theresa Greiner at Fiddler's Ridge Farm for donations of flowers. Theresa is a big backer of the depot!
The construction picture above, compliments of the Potlatch Historical Society. The depot was built in 1906, and thanks to a dedicated group, the old building is gaining a new life!
Posted by WIMHPG at 6:39 AM